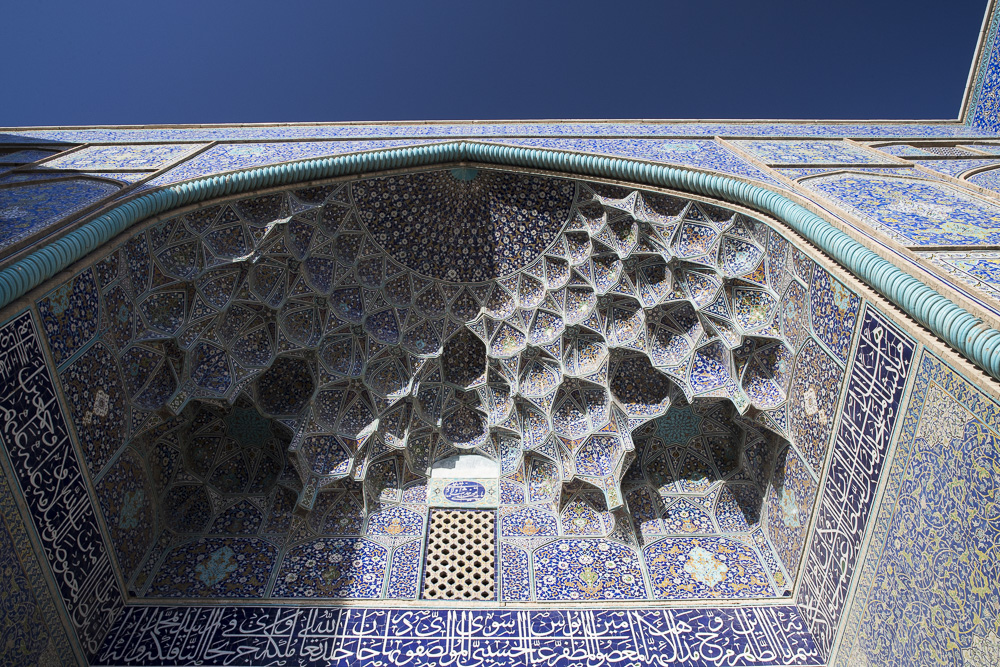 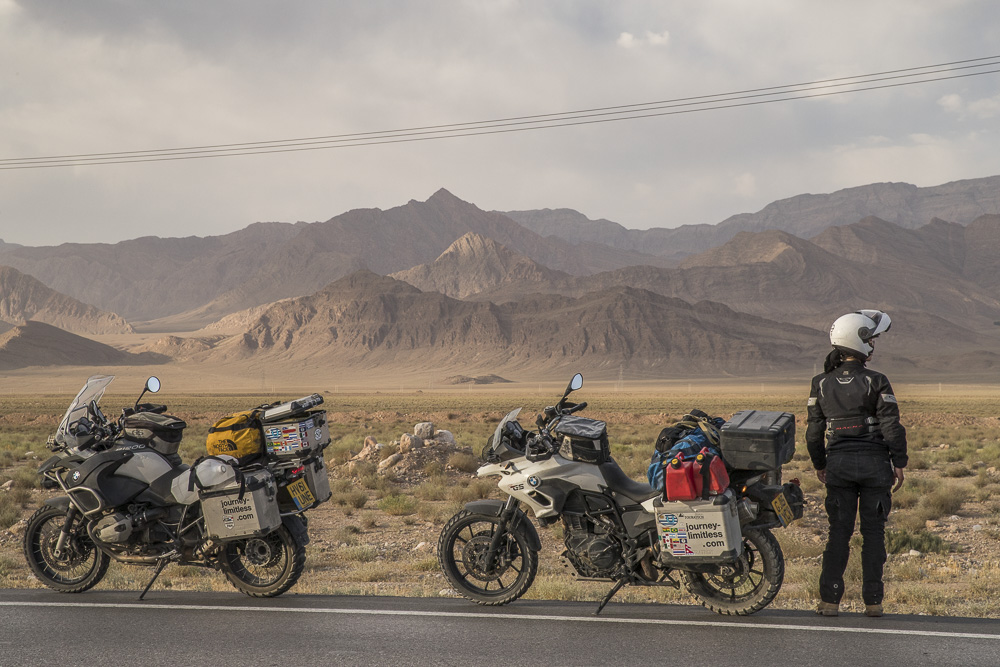 The road to Isfahan

If you ever find yourself planning to go to Iran or wondering about how to do anything over there, then there is an invaluable resource available on Facebook – a group called “See you in Iran”. On there we found endless tips on where to stay, what to do and even how to dress modestly city by city (they each have differing levels of modesty required). It was on one of these groups that we found a host family to stay with in Isfahan. Hotels are notoriously expensive as there are limited hostel-levels stays and most places were pretty much out of our budget. Although we were considering couchsurfing- our internet connection was terrible in Iran (most sites require a VPN to access) and we wanted to be sure that we knew where we were staying. 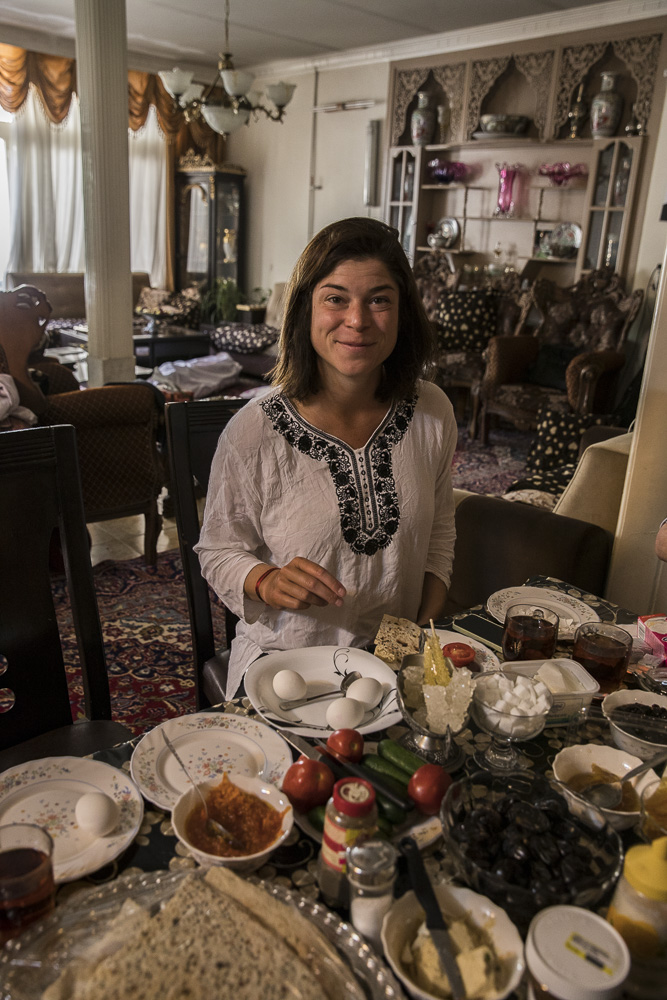 The group came up trumps and we found an excellent host who’s mum spoilt us with an amazing breakfast every morning of our stay! We woke up to a table laden with cheese, breads, olives, carrot jam, sour cherry preserve, eggs and vegetables. 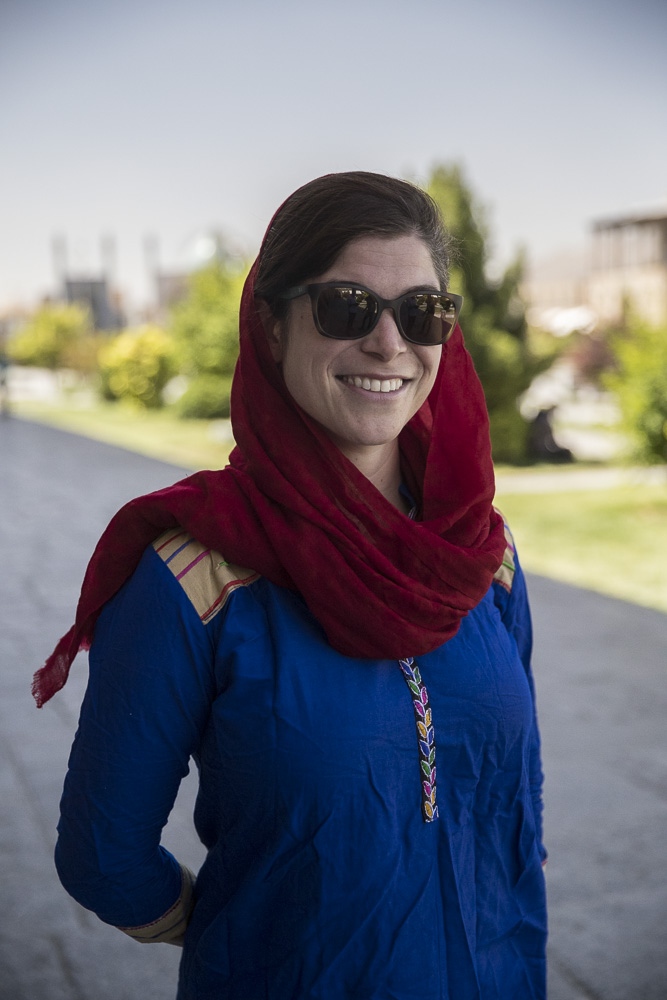 As far of a compromise as possible, Alex in her outfit from India

After a hearty breakfast we were ready to hit the town and see what Isfahan had to offer. Putting our host on the back of the bike, we started in the Jahan square Market. We had discovered that bikes over a certain cc (we think 250cc) are not allowed to be owned by Iranians and big bikes have very strict riding limitations on them- such as a day once can ride them and where, however this isn’t enforced on tourists as officially, tourists aren’t allowed to cross Iran on their own bike with the kind of visas issued to them!

In the market, we tried Isfahan Gaz – a soft nougat classified by the pistachio content, the more pistachio contained, the more expensive it is. It was delicious and worth every penny (as far as Alex was concerned). The shopkeepers were infamously kind and gave us free tries of almost every sweet, it was hard to say no! We entered the covered market which was buzzing with customers. Thousands of stalls were lined up selling coffee, spices, clothes, nick-knacks, homewares, inlaid wood pieces, cups, cakes, everything…

Mounds of sweet smelling spice and of sour pastes designed to add to food or eat as a snack rose up to meet our noses as we walked through.  We tried a little brown cube which tasted unbelievably sour- it sucked all moisture from our mouths and made us salivate at the same time. It was made of curd but had an unusual taste!! We tried various sour fruits made into a preserve- plum, cherry and a heavy, sweet blackberry type conserve. Then, our favourite carrot jam reappeared! 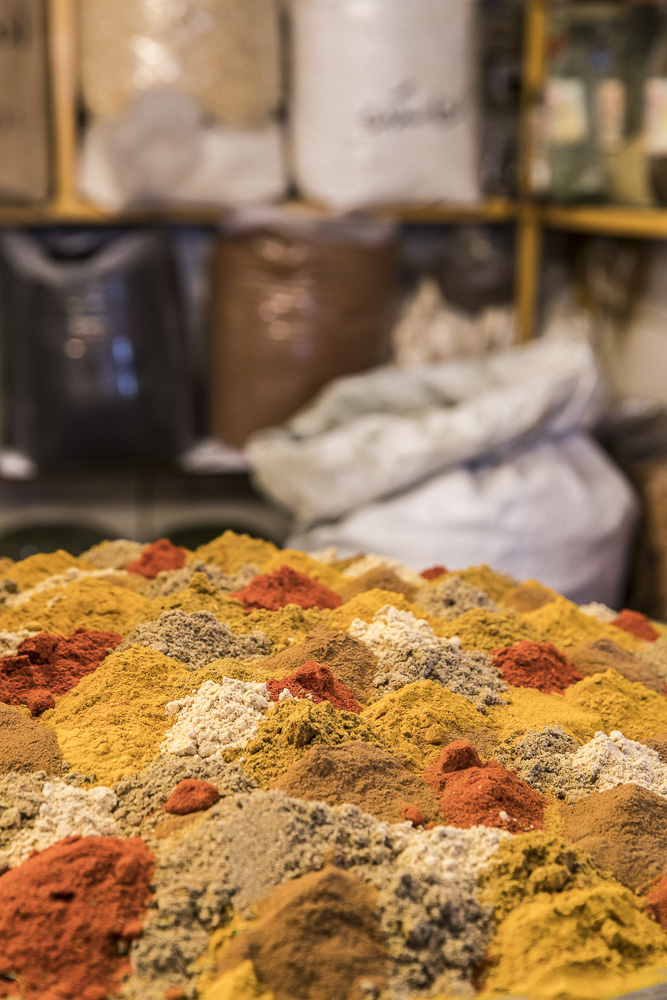 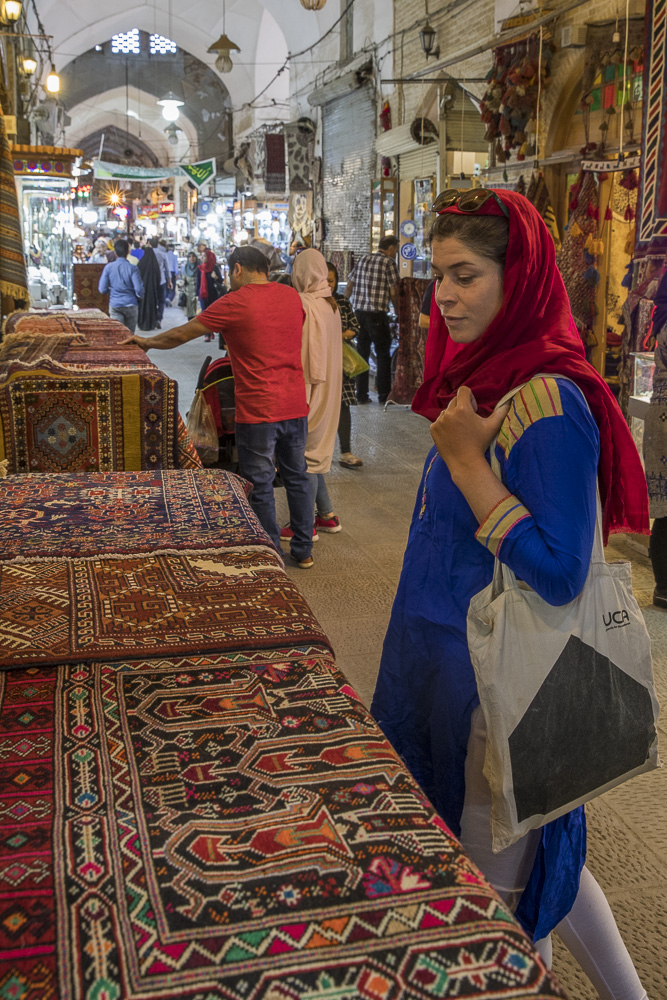 Most impressive were the counters selling spice. These were organised into show pieces – either stacked into a cake formed of spice strata that when cut or scooped into showed off colourful innards of neat rows of spice or neatly pinched hillocks of tempting smells, waiting to be cooked.

We walked further along, admiring the tightly spun silk and cotton on the Persian carpets for sale and then we had the opportunity to admire some handmade table cloths and towels- hand printed and painted for generations by the same family, who are still using the same process to this day. Using wooden blocks, they print on cloth complex patterns which the infill by hand. the inks used are made of natural dyes such as walnut, pomegranate and saffron. 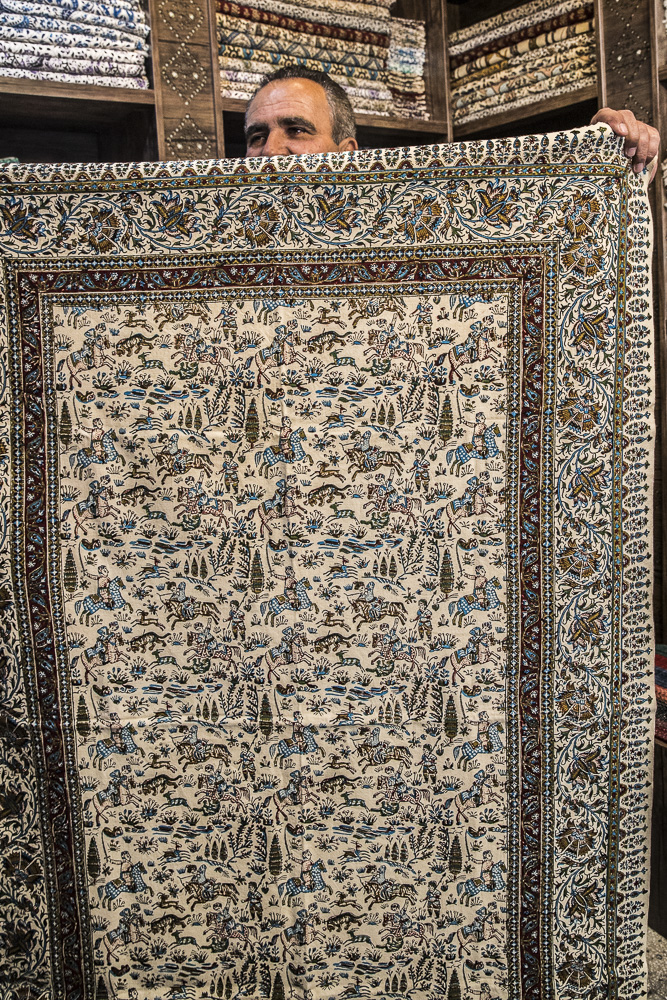 We saw the craftsman printing while we were there and he even had photographs of famous Europeans who’d been to his workshop!! Tracing neatly across the lines, in a moment he had finished an entire teacloth and was doing the delicate in filling as we left to see what other wares were available. 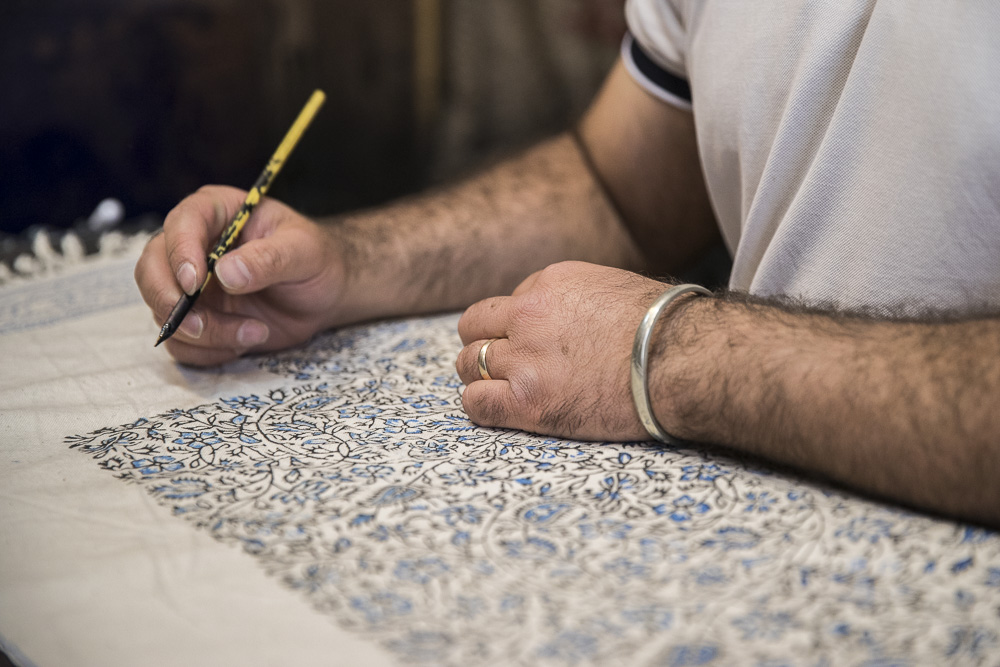 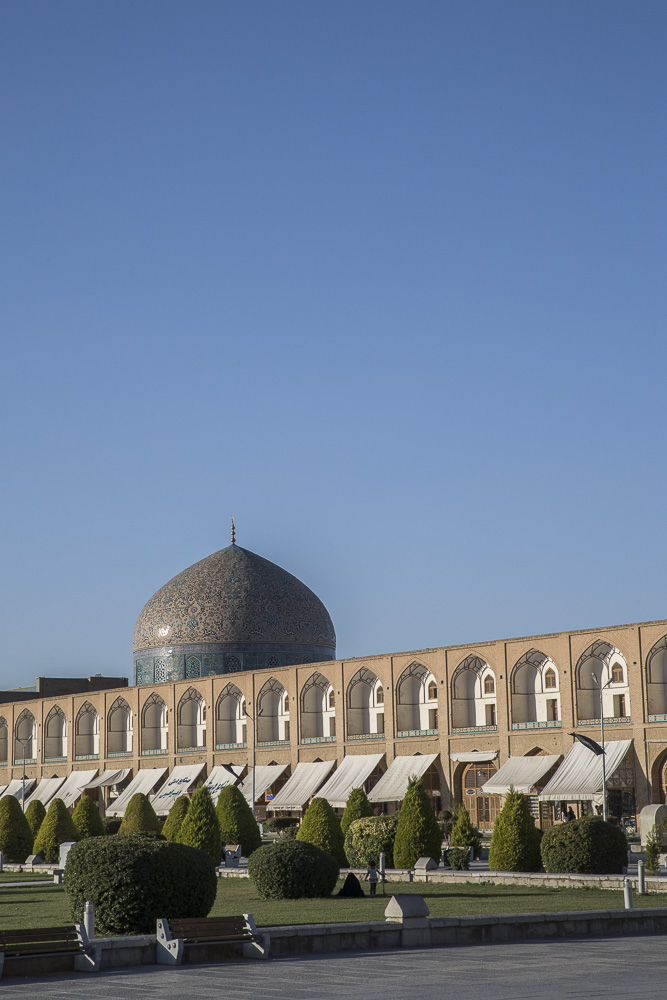 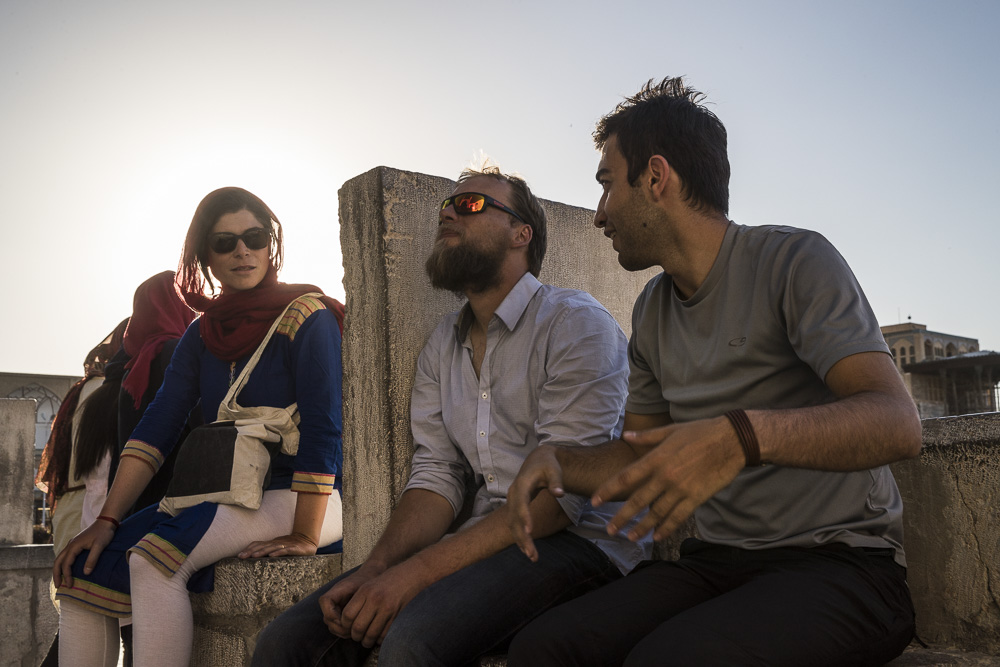 Hanging out with our new friends, Neel the fellow adventurer and our Isfahan buddy 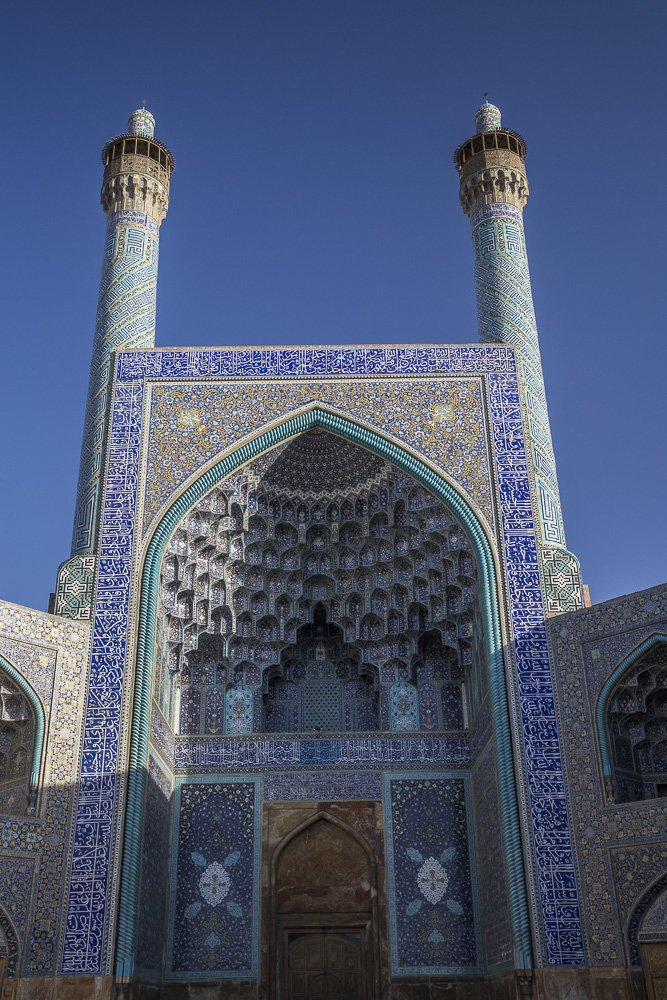 We spent the rest of the afternoon wandering around Jahan square- admiring the mosques (which Alex wasn’t modestly enough dressed to enter)then the Mojtahed Zadeh House which has been transformed into a historical and cultural centre. It was really interesting to see both the architecture of a dwelling (it is one of the oldest houses in Isfahan) and to learn a little about the development of modern day Iran. We visited other mosques and prayer areas which were intricately painted and usually covered in detailed stained glass windows. 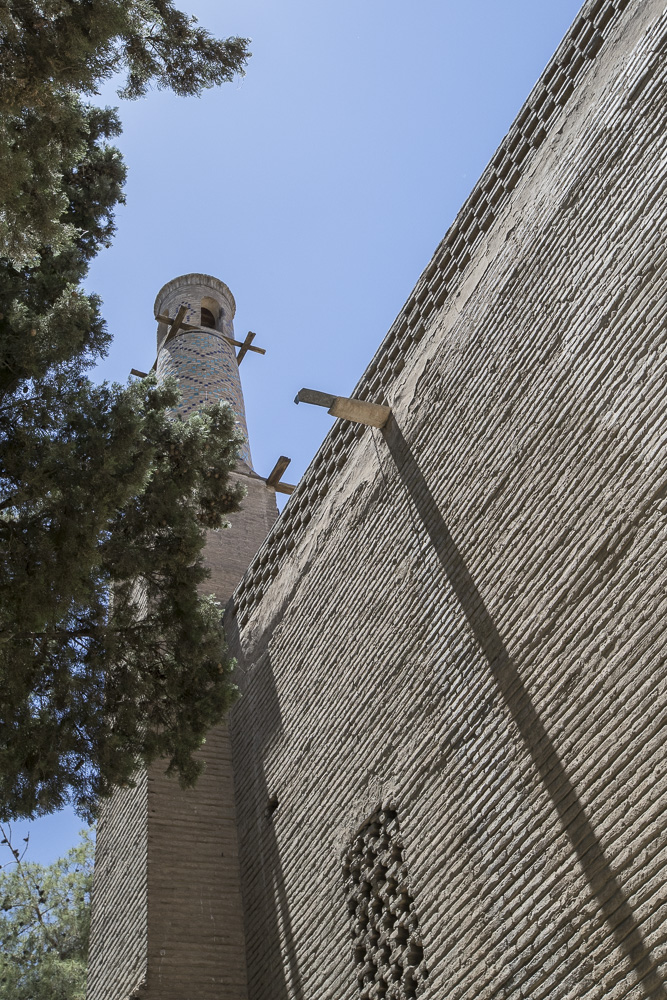 Menar-e-jomban, one of its shaking minarets

We quickly went to the see the shaking minaret– and caught one of its regular scheduled shakings!  It is a controlled process now (after too many tourists were passing through and shaking the towers) with a man, whose job it is, to climb the minaret, brace himself inside and shake it with all his might until the tower dances sinuously in the sun. The wooden beams are not part of the original structure which was made from brick. It shakes thanks to it dimensions which places it as a tall, slender thin walled brick tower, it’s form and dimension give it the impression of flexibility but in actual fact, the frequency of forced, concentrated, shaking is inducing structural damage. To the point that the second minaret is now closed for shaking.

One cool thing about Iran, which the rest of the world should definitely take up, is that there are many potable water points in the towns, providing clean, cold water- essential in the climate. 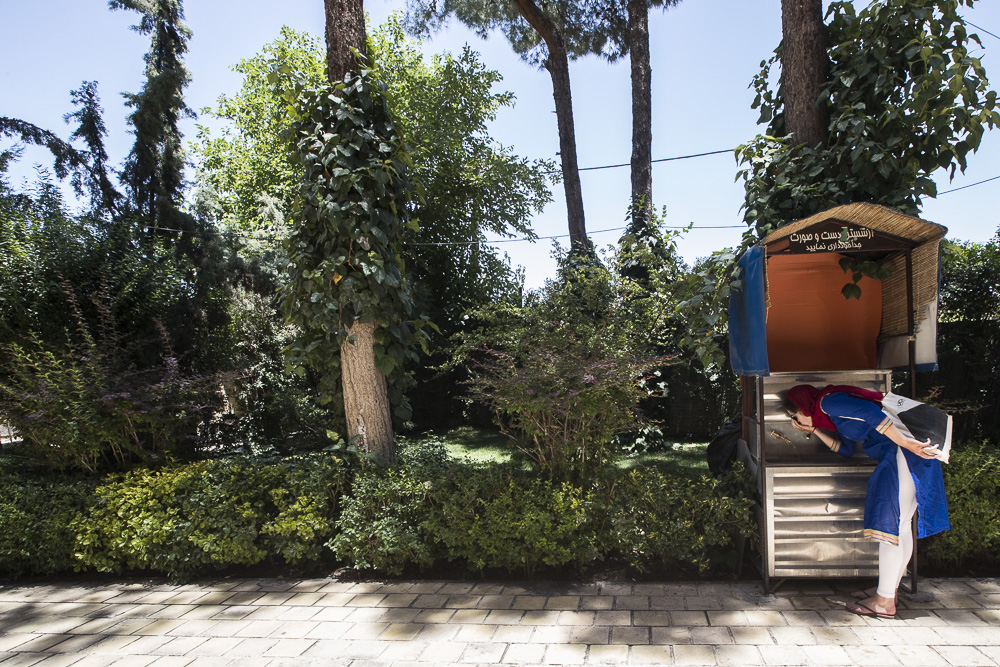 Making the most of free cold drinking water

At the end of a very long but very enjoyable day which included ice-cream, fruits eaten by the river, admiring the many bridges and aqueducts and rides through the agricultural district of town, we set out to find a restaurant which would serve Kaleh Pacheh, a whole boiled sheep’s head.

It is slow cooked in a vegetable broth and served as a rich soup with whole parts of meat served separately. Strangely, this was one of Simon’s childhood dreams: To travel to Iran and eat Kaleh Pacheh! He got his wish and luckily, we found a restaurant which would serve us at almost midnight. 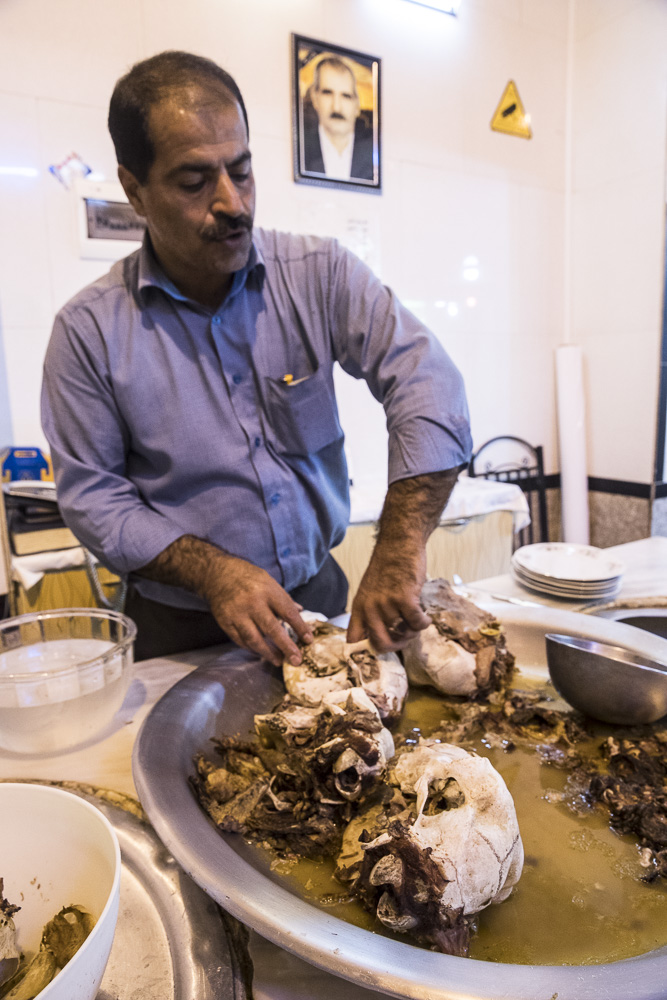 The place smelt heavy with sheep fat and the smell of broth. We sat in a corner  of a tiled room, with a clean cloth and no menu. In this place, they only served Kaleh Pacheh and so Simon selected the head he wanted. Choosing from the almost identical, clean-white skulls was tricky but once he had, the chef gently picked out the eyeballs and the tongue to present on a plate and laid alongside them, the cheeks, soft and glistening with fat from the broth.

The broth was spicy and fatty but deliciously rich with sweet vegetables to cut through the meatiness. The cheeks were tender and melt-in-the mouth (in a good way) and the tongue was extra soft and gave way between the teeth like pâté. Simon was brave enough to try an eyeball, it arrived on a plate so cooked that it had unraveled and lay on the plate like a white, firm blanc-mange with the black of the lens hiding in the mass… He popped it in his mouth whole! Apparently it was meaty and pleasant to eat. However, he didn’t ask for the second eye. 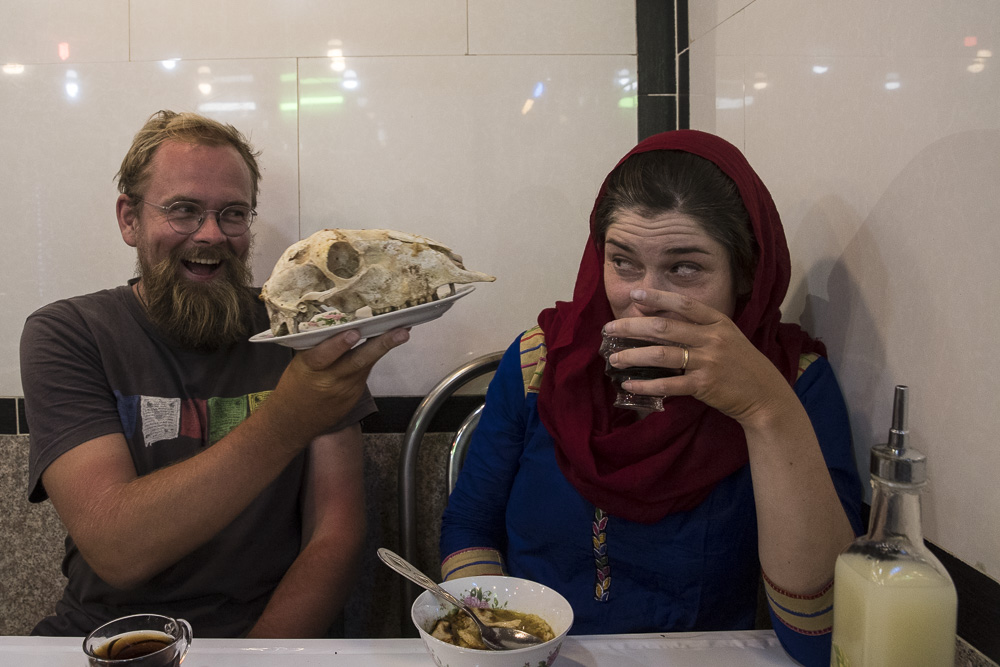 Simon was very excited about introducing his dinner to Alex