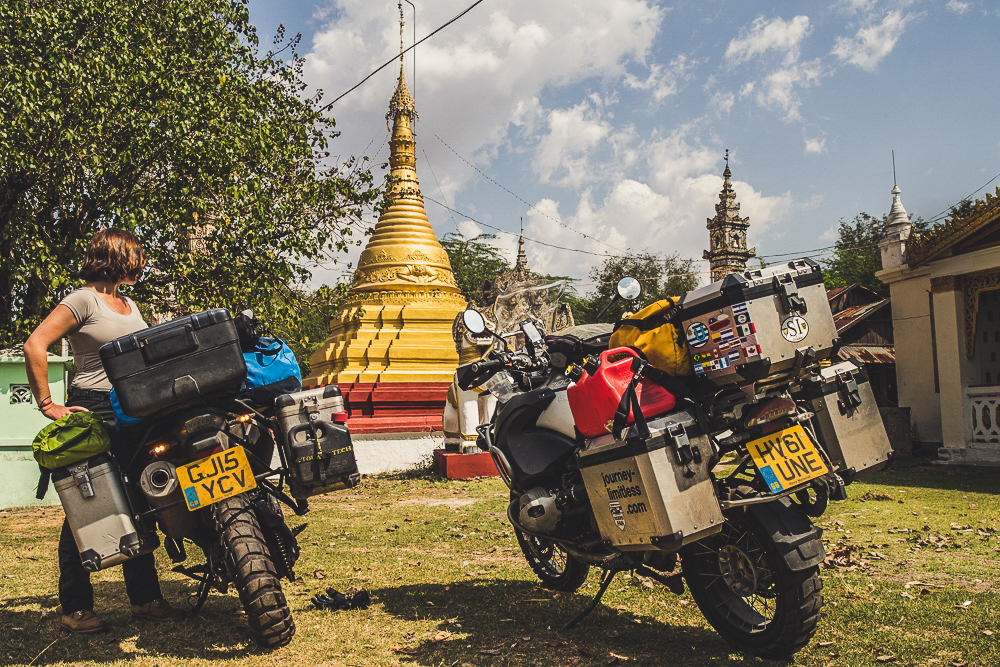 The Mae Sot border was a little more problematic but once it was was established that we had no permit and no stamp on our carnets, it all went smoothly. Our tour agency sorted the paperwork for us on the Myanmar side so that the crossing was quick and painless. The only tricky part was that in Thailand, traffic drives on the left hand side but in Myanmar, on the right. The bridge connecting the two borders was fairly narrow with only a cursory arrow painted in the middle to indicate that left hand traffic should switch to the right. Thankfully major crashes were avoided as the vehicles moved pretty slowly between the pedestrian traffic.

We met the bikers we’d be touring with for the next 10 days who all had very different stories and reasons for being there, all of them equally fascinating and inspiring. Once the paperwork had been wrapped up, we suddenly heard the National Anthem being played and everyone in sight lined up quietly, dropped everything and either bowed their heads or clasped their hands neatly behind them to listen to the anthem in an orderly fashion. On the final note, the area became re-animated and the frontier buzzed again with activity. We set off towards the Hpa-An caves, finding the roads to be fairly narrow and hilly, bouncing between tiny villages and grasslands. The landscape was totally different to the Thailand side we’d just left which amplified the feeling of entering new territories. 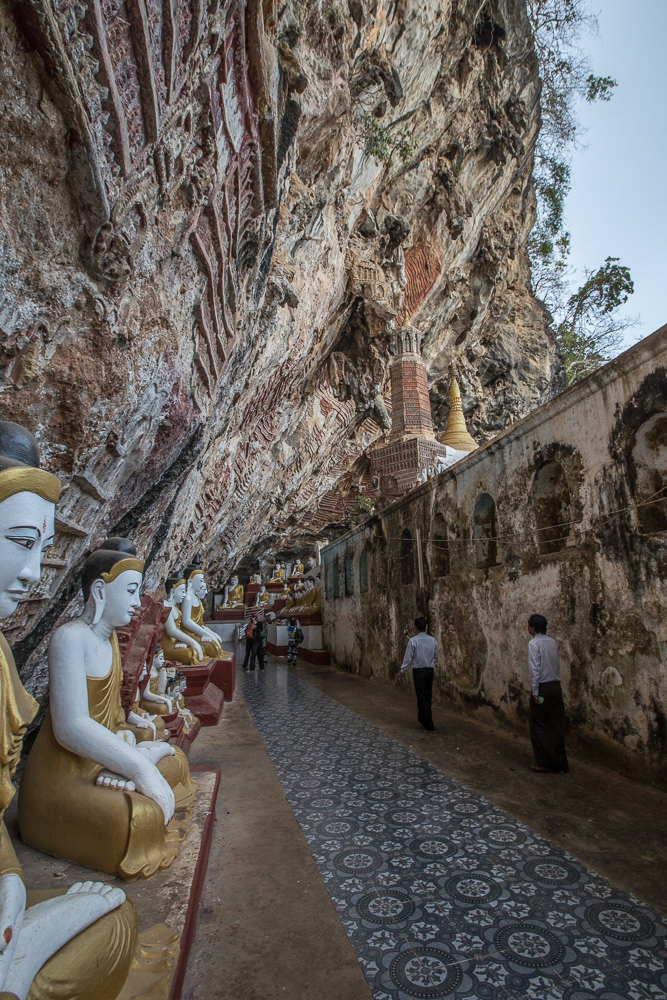 Eventually, after following a tiny little track big enough for only one bike at a time, we came upon the Kaw-Gun caves. Ceramic reliefs scale the height of the cliff-face, depicting tiny Buddhas and scenes from his life. Beneath the reliefs, Buddhas sit and line the walkway into the main cave within which there is a huge reclining Buddha. Some of the figures were being restored and it was a pleasure to witness the delicate touch and careful smoothing of plaster and paint.

At the top of the cliff face we could see curious lobes which rippled with a strange sheen in the sun. After watching the phenomenon for a little while we realised they were huge wild bee colonies clinging to the rock face and the ripples were caused everytime a bee re-entered the fray, a wave would travel across the surface and catch the sun.

The intricate reliefs gave a curious texture to the stone and the sea of Buddha figures a constant presence. It was such a unique setting and experience that we couldn’t help but wander around transfixed by the detail. All too soon it was time to move on and find a lunch spot. 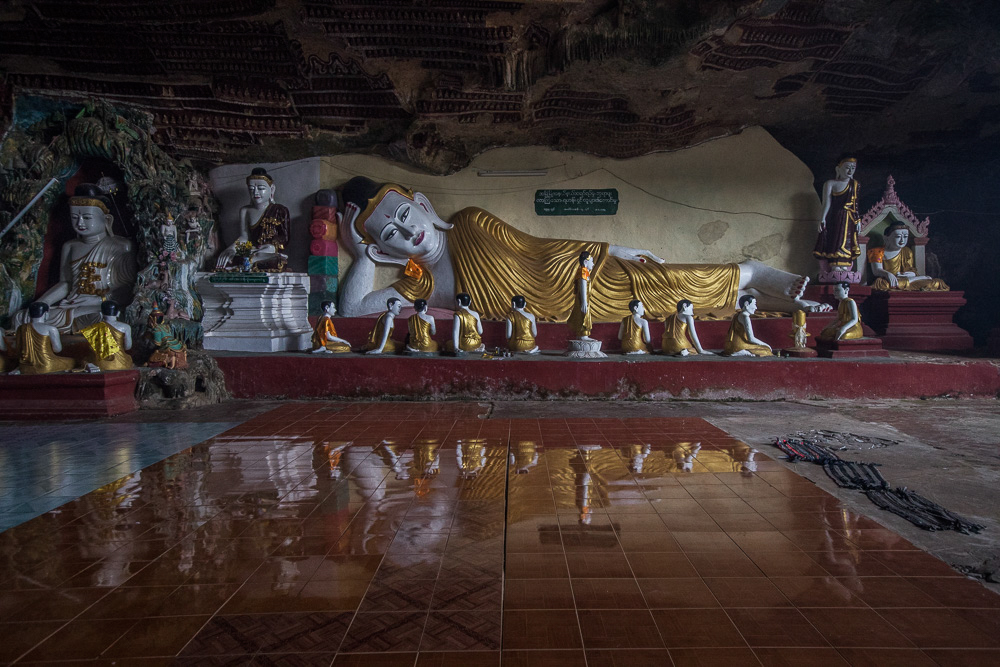 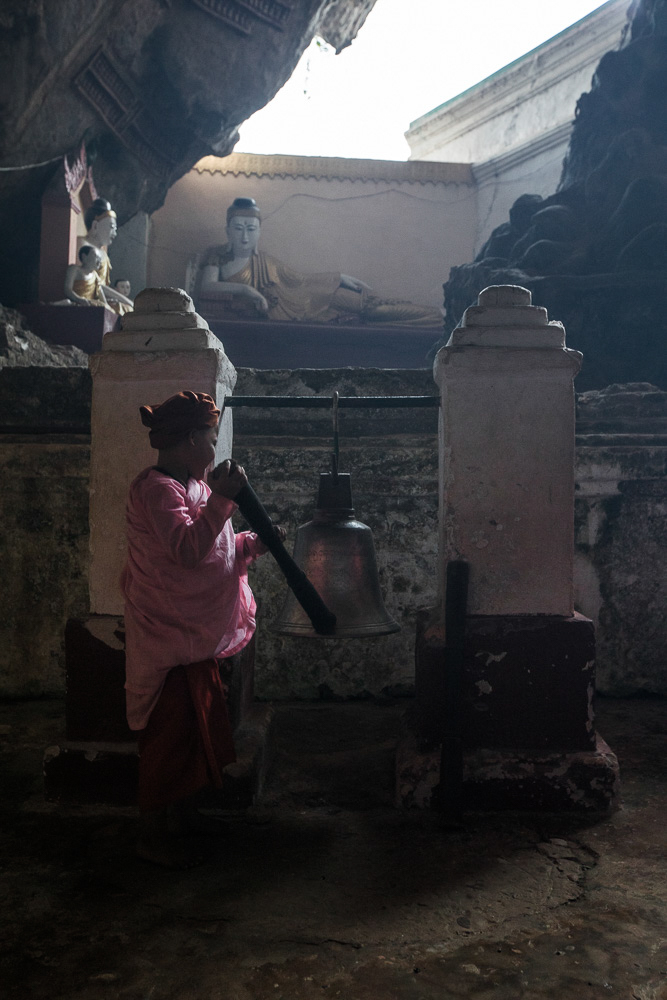 Ringing the bell after giving offerings

We re-joined the main road and stopped in a roadside restaurant which served all sorts of curries and these arrived (customarily, as we later discovered) with a myriad of small dishes of fresh salad, pickles, chutneys, fish pastes and soups so that alongside your main dish you get a dozen snacks and delicacies to complement your meal. This was great but we were unused to so much food for lunch so began to feel sleepy in the afternoon warmth on the bikes! Disaster was averted, however, as we stopped for the night to visit Golden Rock the next morning.

To access Golden Rock, as the road up is closed to motorbikes in particular, we took a public bus. This was little more than a pick up truck with a roll cage and narrow benches along it to seat ourselves. To access the bus, you climb a wooden platform and step down into the rickety machine. All packed in, we set off. We’d scored ourselves a Jenson wannabe who pelted around mountainous corners and, not wanting to lose momentum, hurled beeps at oncoming trucks in the hope they’d melt into the rock face out of his way. Despite the high incline and the very frequent hairpin bends, he managed to overtake most of the departed buses and once we pulled into the parking lot for the Golden Rock arrival bay, he jumped out of the cab to breathe in a much needed fag, looking smugly cool in his aviators and baseball cap, totally oblivious to the brace position all the passengers had adopted for the majority of the journey. 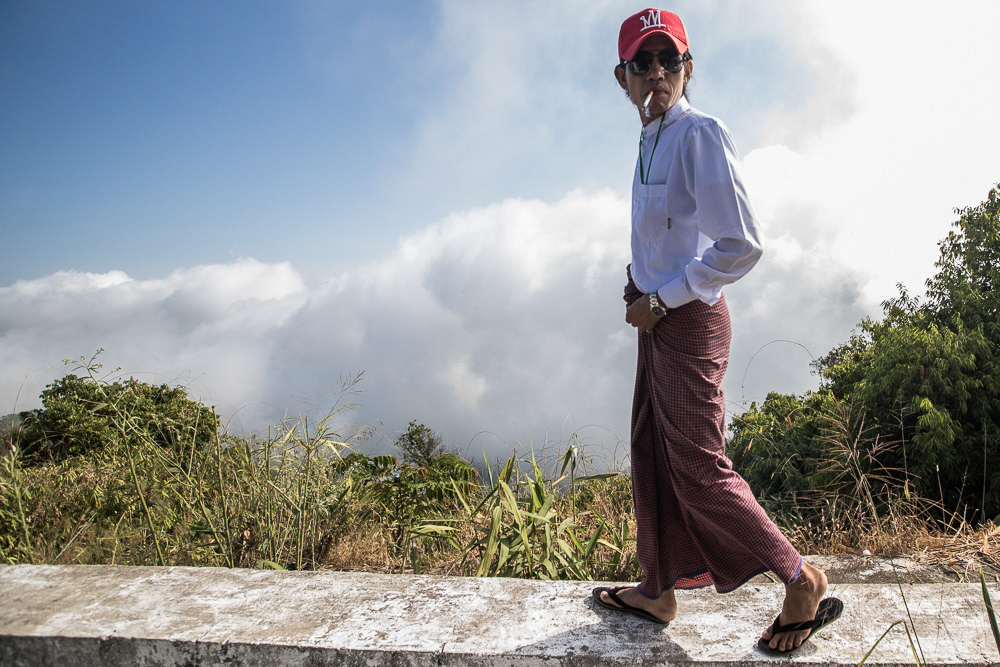 Driving is a dangerous game ; nicotine break after almost killing us all

Walking up to Golden Rock

We all jumped down, feeling a little green around the gills, and wobbled off towards the lane which leads to Golden rock. We passed porters with baskets strapped to their backs, carrying goods up to the village and hermits who’d come down from their mountain hideouts to beg for alms.

The lane was bustling with street food stalls and souvenirs. Many people selling handmade malas and miniature basket balls (for playing a type of football game). They sold food, stacks of pots balancing on a small stove, preparing hot snacks for visitors.  All of us were frequently stopped for selfies with local visitors who were pretty surprised to see so many tourists in one go! 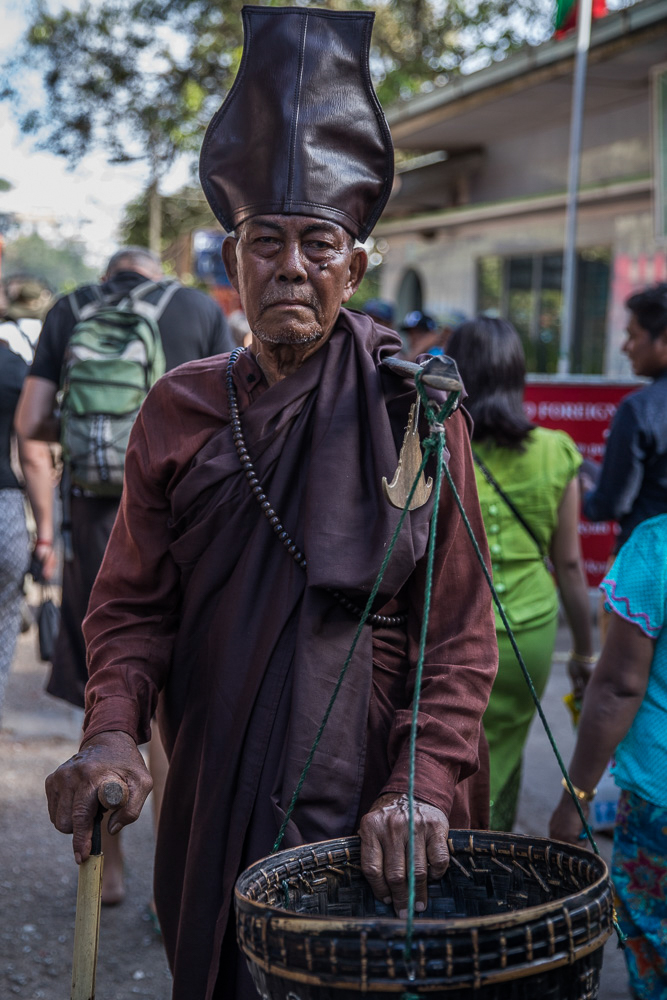 A hermit collects what he can

With the promise of coffee we carried on to the top of the lane to the Golden rock itself. Hermits still being in the area had a nice circularity to the legend- Golden rock was said to be created by a hermit who lived on a mountain opposite to his brother- also a hermit. Every day they would signal to each other with a fire that they were well and healthy but one day, the signal didn’t come and the brother of the Golden rock mountain had come to learn that his own brother was dead so he had a rock the shape of his brothers head placed on top of a strand of the Buddha’s hair. This rock was in turn covered in gold leaf by devotees and now gives the impression of a huge golden rock balancing precariously on the edge of a cliff.

Male devotees are invited to place pieces of gold leaf on the rock face to keep it gleaming in the sun. Women can only admire from a distance which seemed to be a theme in Myanmar, that female and male worshippers should be separate with separate rights and expectations.  Once Simon had smoothed his few leaves onto the rock, we had a coffee to commemorate the action and to settle our nerves after the hair raising bus ride up the mountain.

Burmese coffee is served black, with a little sugar and a squeeze of sweet lemon. The lemon adds a pleasant tanginess to the bitter coffee and the sugar lends a smoothing effect to the whole.  It was served with crispy sweet pancakes, similar to the French crepe dentelle biscuits.  The bus for our descent was less ambitious with breaking speed records but the incline was so steep that, once sat in the front row, you had to brace yourself physically against the drivers cab to not brain yourself on it on the way down. 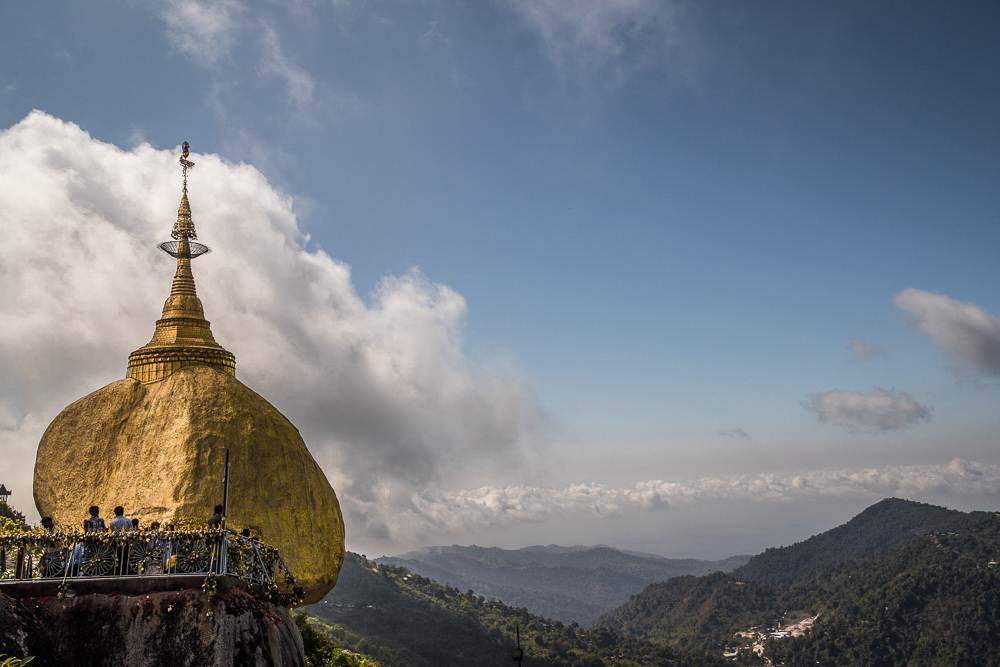 In the afternoon, it was time to set off towards Yangon, the old capital city of Burma. We were reunited with our bikes and were soon battling our way through the slightly haphazard traffic of Myanmar. The golden rule : if you overtake another vehicle, sound your horn a couple of times to warn them. It works a treat- stuck behind trucks, it seems you have reached an impasse on a narrow road but sound your horn and the truck will eke over ever-so-slightly to let you pass!  The danger lurks in scooters launching themselves from side roads without warning or even looking. It’s always safer to ride nearer the middle of the road.

Safely brought to the outskirts of Yangon, we parked our bikes at the local police station as no motorbikes are permitted in the city limits. The police chief came out from the single storey office, wearing trousers, a wife beater and suspenders to greet us and invited us to park in the sandy courtyard. Leaving the bikes behind, we bounced our way to Yangon to stay in an old hotel which felt pretty colonial in style but its high floors meant a unique view of the old capital which we only had a night to visit.