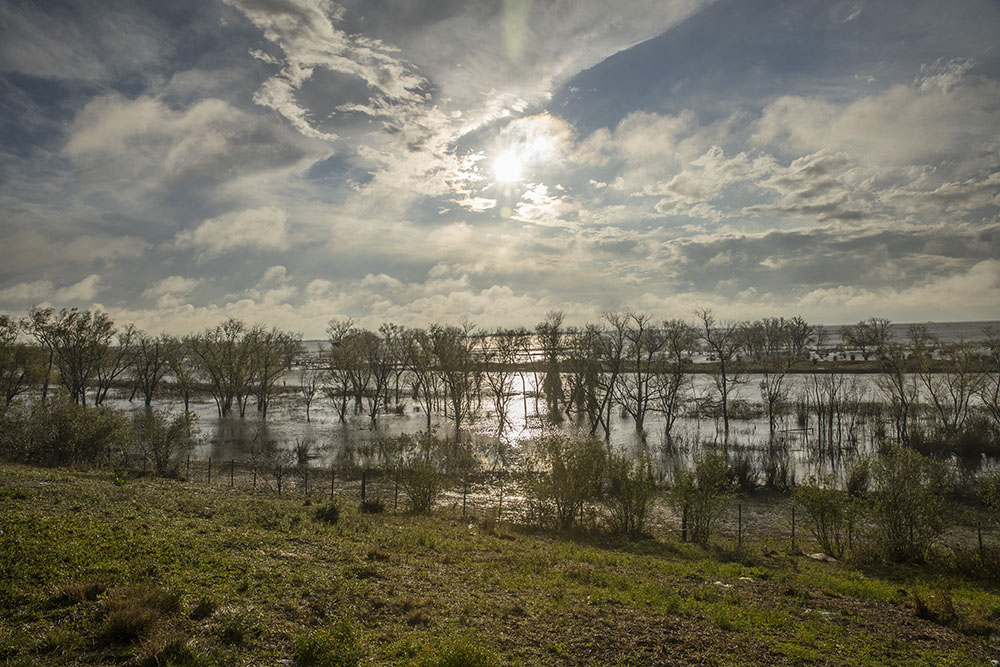 We left Montevideo on Sunday 24th July, our panniers packed and both of us excited to finally be on the road. We had planned four days to reach Mendoza, our last stop in Argentina before crossing the Andes to Santiago, Chile. Four days to ride 1432km, which sounded borderline leisurely as the roads we’d seen so far had been high quality and well maintained. However, each of the days ended up akin to the labours of Hercules with a different daily challenge thrown at the pair.

A few hours out of Montevideo and the potholes began! Towards Mercedes on Highway 2, the road begins to disintegrate slightly but the cars keep their same urgent speeding (at odds with the relaxed, almost inertial pace of life). We devised a system where Simon rode ahead and warned Alex of potholes through the intercom with detailed descriptions of their depth and frequency. All Alex could think of was how many times she’d read about potholes being the cause for punctures or catastrophic falls, neither of which occurred despite the road’s best attempts.

An hour before dusk, the border with Argentina was reached, having crossed at Fray Bentos (better known here as a town rather than a pie manufacturer). The border crossing was fraught with confusion as usual – “You’re French, and he’s Polish? And your bikes are from England?” Queue much head scratching over the enormity of the concept of the European Union and how this situation will be a rarity following Brexit. We finally made it through complete with the good wishes of the border guards and other travelers. We found a safe place to camp in the outskirts of Gualeguaychu and enjoyed a sleep punctuated with the barks and growls of some very wild and very proximate dogs.

We woke to a grey, damp dawn, free of dogs but very shortly complete with rain showers and thunderstorms. We distracted ourselves with coffee and breakfast as we waited for the rain to abate. Even after breakfasting, packing the essentials, washing up, the rain had increased rather than conveniently disappearing. Fed up of waiting, we packed up the tent in the rain and hit the road, both already soaked through. Followed was a gruelling 264km ride through cold windy rain. Everytime a truck whistled past, the bikes would be sucked in from the side wind and sprayed with oily water. Past Victoria to Rosario the road became a single lane series of bridges across flooded plains with islands of stranded cows and drowning tree crowns. Just at emotional breaking point, the rain finally ceased and Rosario appeared over the horizon bathed in rainbows. The absurdity of this beauty after the torture of the journey caused us to stop on the side of the road to rest a moment.  With dusk fast approaching and no dry ground to camp on, we stayed instead in a hotel to dry everything and warm up a little.

The next morning, we set off at 9am and were greeted with the promise of gusty winds. A further obstruction was imposed by the intercom system failing mysteriously. We decided to keep going without intercom and braved the high winds out of Rosario. An accident on the highway forced us off the main road into narrow side roads bordered by thick mud and ditches. We bypassed the enormous queue of trucks by taking the muddy hard shoulder which Alex immediately slid on, dramatically snaking to the ditch. A little shaken but unhurt, we continued on to try to regain the highway. Once reached, it appeared deserted of cars. The high winds made it tough to ride, with both bikes forced at a 60 degree angle into the wind. After riding for an hour, Alex’s reserve fuel light blinked on. We realised we hadn’t seen a petrol station since leaving Rosario and it was another 200km at least to our next destination. In a panic, Alex topped up using the 3l in the jerry can and hoped against hope that a petrol station would appear. 8km later, one did and we appreciated how vast the distances are in Argentina and we immediately vowed to buy a bigger jerry can.

The wind finally died down around 4pm when we approached Rio Cuarto and gave way to beautiful clear skies and good roads. Exhausted and in need of rest, we tried to find an area to camp. However, Rio Cuarto is a busy land covered in agriculture and industry making wild campsites very rare. Towards 6pm the situation because a bit more urgent as the sun was setting and we decided to pull into a farm and appeal to the kindness of strangers.  We were lucky enough to have found a kind farming couple who let us set up in their garden. We fell asleep with the gentle sounds of cows and the playful protection of the family dogs. The farmer’s daughter, Ani, introduced herself in the morning in perfect English and we quickly identified a fellow traveler and adventurer. Full on coffee and biscuits, we set off for Mendoza. It had been freezing in the night and Alex’s bike was unresponsive. Stuck at 30mph until the engine warmed up, it was slow going to Mendoza. Eventually the bike picked up to 50mph and the roads opened up to showcase beautiful blue mountain ranges rising from endless fields of wheat and soya. It was frustrating to have no power on such a glorious day but it made for a leisurely and comfortable ride.

Every day to Mendoza had been plagued with a different challenge. We met each challenge with fortitude and determination – mostly out of necessity. The basic daily objective of surviving and finding a safe place to rest drives you to keep moving. Some challenges you can live with and adapt to (weather), others you learn from and equip yourself with the tools to “deal with it” the next time- whether it’s learning that a fall isn’t the end of the world or that you need more jerry cans. Or simply allowing these challenges to better understand your own emotional limits and physical boundaries. The bike was fixed quickly in Mendoza, the fall had jarred the clutch and made it unable to fully disengage. A small and easy fix which coupled with two nights’ rest in Mendoza allowed us to be ready for the next challenge- the Los Libertadores pass in the Andes.

Rainbows at Rosario after a difficult ride.

Frosty dawn in Rio Cuarto makes for a promising day ahead.

A safe place to sleep thanks to the kindness of Christina and Carlos, on their farm near Rio Cuarto.

Simon and his afternoon siesta, 100km from Mendoza.

The challenges of recharging electronics on the road!

A good bit of Highway 2, Uruguay

The flooded plains outside Victoria, en route to Rosario

Breakfast while waiting for the rain to go.