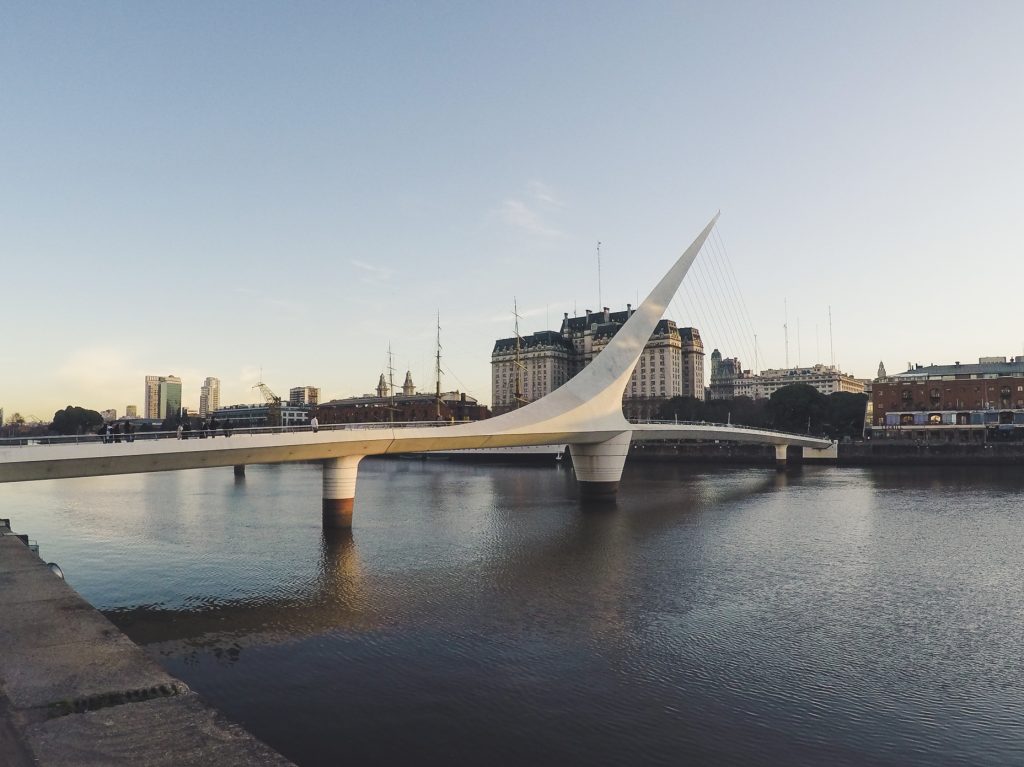 Having been spoilt by the views of Iguassu, we reluctantly left it behind along with the two Hungarian cyclists we’d befriended who thought we might cross paths again in Chile (it’s a long way to Chile on a pushbike).

Alex and Simon with the Hungarian cyclists at the hostel in Iguassu.

We took the circuitous route to the Argentinian airport by bus, another bus and taxi and relaxed on the lawn in front of the airport. Alex loves to be early for flights to Simon’s extreme chagrin but their slightly longer wait was rewarded by the pair being absolutely covered by the most beautiful butterflies. A fine recompense!

Buenos Aires heralded the start of the journey with the motorbikes’ arrival on the 12th July. The two, now well rested, were anxious to start riding and make up for the delay already impacting the journey. They left sunny Iguassu and landed in the torrential rain and cold of B.A. Neither Alex or Simon had been to Buenos Aires before and so they revived their couchsurfing accounts to find a host who could introduce them to the city. They had the good fortune to find Juan and Elise who were amazingly gracious and relaxed hosts!

Juan and Elise in Buenos Aires, they get the prize for most patient hosts.

The night the pair arrived they learnt that the bikes were arriving not on the 12th but the 14th!! Their hosts were kind enough to let them stay an extra few nights despite the Swedish adage- “guests are like fish, more than 3 days of hanging around and they start to smell.” A&S will be forever grateful to them – and their dog Petunia who slept with A&S on the couch all week!

Petunia wants in on the photo!

After a few nights of good meat, lovely walks through B.A. and a stroll through many exhibitions, the pair were finally able to pick up their bikes. At 9am they met Sandra and Javier of Dakarmotos who would take them through the complex tango of customs. First you pay the airline waybill, then you have to pre-pay an insurance for the bikes, then go to customs to release the bikes at great expense. After many coffees, many pesos and even more sitting later, the bikes were freed at 4pm. So began their first ride on South American soil as they rode back to Buenos Aires for a night before their ferry to Uruguay. Check out the upcoming video for the synopsis of BA and the pick up (coming soon!)

Puerto Madero in the evening sun.

The ferry service, Buquebus, worked well to take them from Buenos Aires straight to Colonia in Uruguay. The ferry guys were super nice and after strapping the bikes down at the start, wished them both well on exit.

The bikes loaded up and ready for their boat ride to Colonia in Uruguay!

They left Buenos Aires for a new adventure in Uruguay… Leaving behind one very beautiful and fun city for a brand new country!